Home » SECOND TO NONE: The Beatles Song Index » I’ll Follow The Sun (Lennon/McCartney)

A song dating back from the band’s Cavern Club days which was brought back to life for the 1964 Christmas release Beatles For Sale.

“That’s Paul again. Can’t you tell? I mean, ‘Tomorrow may rain so I’ll follow the sun.’ That’s another early McCartney. You know, written almost before The Beatles, I think. He had a lot of stuff” – John Lennon, from All We Are Saying

“I wrote that in my front parlour in Forthlin Road. I was about 16. ‘I’ll Follow The Sun’ was one of those very early ones. I seem to remember writing it just after I’d had the flu and I had that cigarette – I smoked when I was 16 – the cigarette that’s the ‘cotton wool’ one. You don’t smoke while you’re ill but after you get better you have a cigarette and it’s terrible, it tastes like cotton wool, horrible. I remember standing in the parlour, with my guitar, looking out through the lace curtains of the window, and writing that one.” – Paul McCartney, from The Complete Beatles Recording Sessions

“It wouldn’t have been considered good enough (to be performed by the group). I wouldn’t have put it up. As I said before, we had this R&B image in Liverpool, a rock ‘n’ roll, R&B, hardish image with the leather. So I think that songs like ‘I’ll Follow The Sun’, ballads like that, got pushed back to later.” – Paul McCartney, from The Complete Beatles Recording Sessions

“At first they couldn’t think of anything for Ringo to do – he played drums on a run-through, but it sounded all wrong, too aggressive and distracting; Paul wanted something more subtle. After a good deal of discussion, Paul came up with the idea of having Ringo just slap his legs in time, and that worked well. Enthralled, I watched (engineer) Norman (Smith) carefully position a mic between Ringo’s knees; then, back in the control room, he cranked up the EQ to add some extra depth to the sound.” – Geoff Emerick

“On the record we got Ringo to tap his knees. We were thinking in terms of singles and the next one had to always be different. We didn’t want to fall into the Supremes trap where they all sounded rather similar, so to that end, we were always keen on having varied instrumentation. Ringo couldn’t keep changing his drum kit, but he could change his snare, tap a cardboard box or slap his knees.” – Paul McCartney, from Many Years From Now

“I found George Harrison’s simpleminded eight-note solo – not even a solo, really just the melody line – downright embarrassing. He wasn’t even supposed to play that solo: for the first few takes, John did it, on acoustic guitar. Despite the overall good vibe of the day, George Harrison seemed annoyed, perhaps because he hadn’t been given much to do. At one point he marched into the control room and complained loudly, ‘You know, I’d like to do the solo on this one. I am supposed to be the lead guitarist in this band, after all.’ Nobody was satisfied with the result. He wasn’t happy either and wanted to make another attempt at it, but a weary and slightly annoyed George Martin finally put his foot down, saying, ‘No, we have to move on.'” – Geoff Emerick

See THERE WILL BE A SHOW TONIGHT: The BBC Performances for complete information on BBC performances and recordings

NEW ON ABOUT THE BEATLES!

The Beatles' iconic and memorable logo was created on a whim by a drum store owner for a shockingly small amount of money — which took years to refine and decades to be adapted as their official logo.

Read about the origin of the Beatles logo and a look at their various logos through the years. 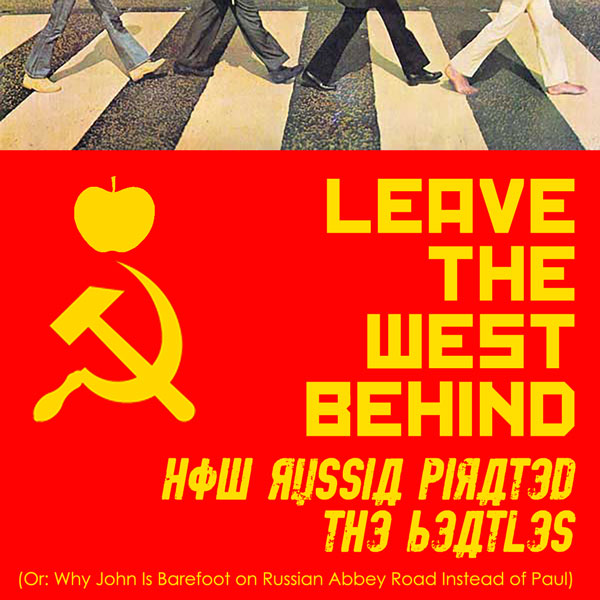 After the fall of Communism in the U.S.S.R., a former underground producer became a hero to a nation starved of the Beatles and rock and roll.

Read about the history of pirated Beatles albums in the USSR and post-Soviet Russia.